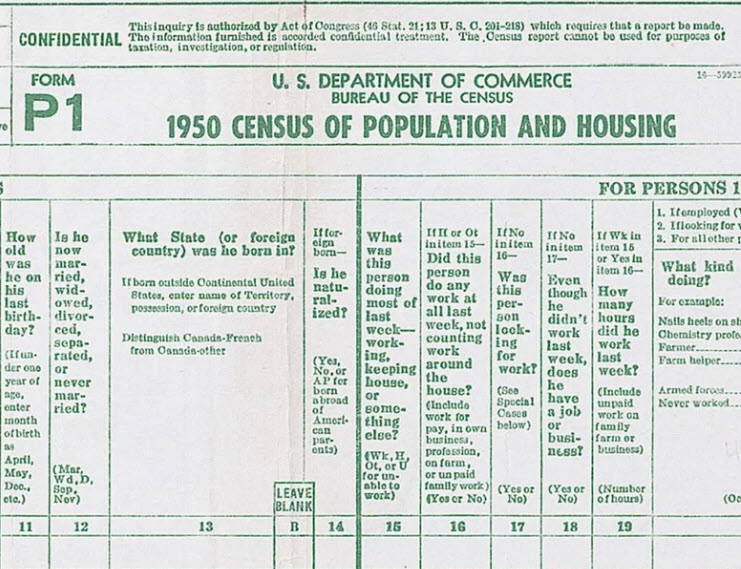 The 1950 census was released digitally on April 1, 2022. The digital images are accessible online free of charge.

The 1960 and later censuses are not available for public use because of a statutory 72-year restriction on access for privacy reasons. (92 Stat. 915; Public Law 95-416; October 5, 1978). If you need information about yourself or a deceased person from the 1960 or later censuses, fill out Form BC-600 from the Bureau of the Census Age Search Service or write to: U.S. Census Bureau, National Processing Center, 1201 East 10th Street, Jeffersonville, IN 47132.

The census day was April 1, 1950. The Nation was divided into Enumeration Districts (EDs). Enumerators (census takers) in urban EDs were expected to complete the census in their district within two weeks while enumerators of rural areas were expected to finish work within 30 days.

The 1950 census questionnaire - “Form P1, 1950 Census of Population and Housing” - was printed on white 19" X 22" paper in green ink. The front side of this form provided space for information for 30 persons, with a separate line for each person enumerated. Six persons on each page were also asked additional “sample” questions at the bottom of the page. These records were microfilmed by the Census Bureau in 1952 and the original paper records no longer exist.

The reverse side of the Form P1 was the housing schedule with space for information about 12 dwelling units (houses, apartments, etc.) of persons listed on the population side of the form. This side of the form was not microfilmed and the original paper records no longer exist.

Questions about the 1950 Census? Bring them to History Hub's Census Records community to get answers from National Archives staff and other genealogy enthusiasts. History Hub is free and open to anyone.